One of the bitcoin casinos that recently caught our attention with a wide selection of games is the 1xBit casino. This 1xBit review will cover how this bitcoin betting and casino site ranks among the most famous names in the bitcoin gambling industry.

We’ll start our 1xBit casino review with little information about the casino we found on their website. The 1xBit casino has been operating since 2007. Curious about additional details concerning this casino’s history, we contacted the website’s live chat support to find out a bit more. However, a support agent told us they were not authorized to give us any information about their company, which is odd as most bitcoin gambling websites have no problem sharing some general info about their company. 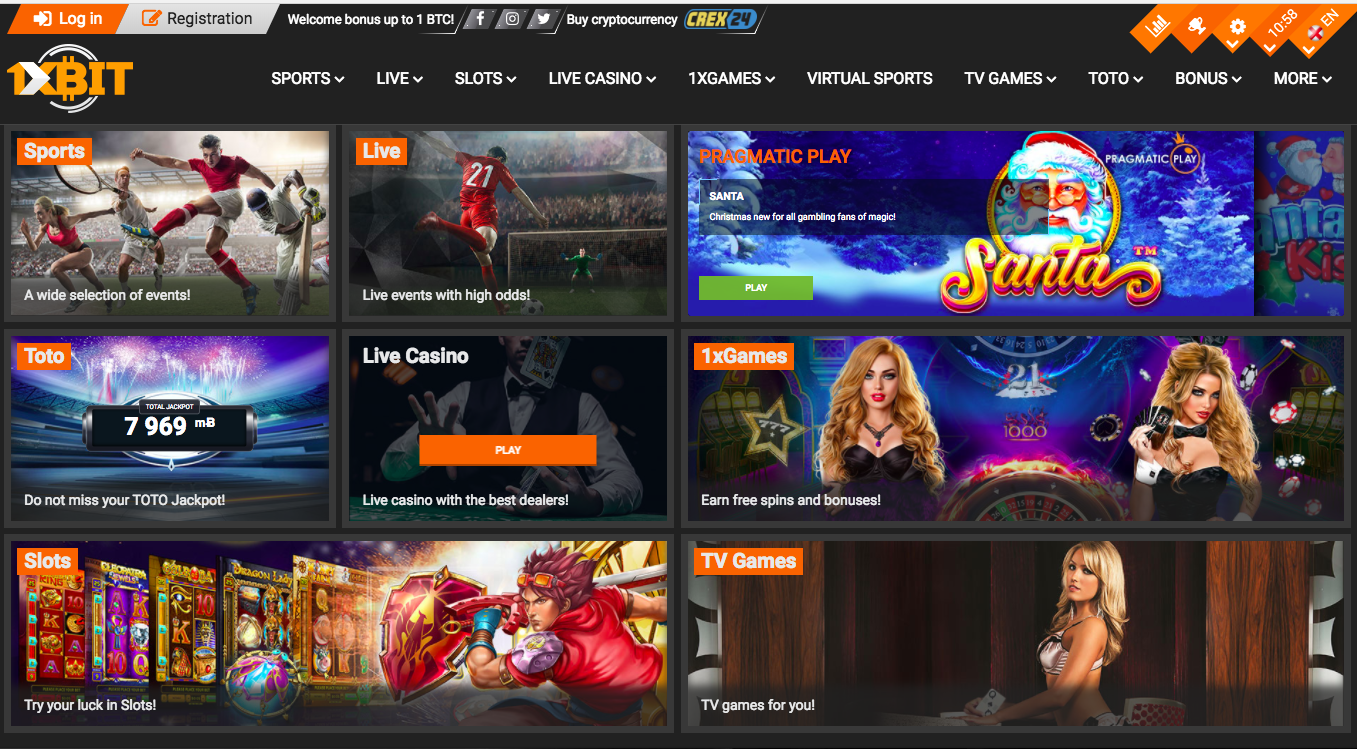 Signing up at 1xBit is straightforward and swift thanks to the one-click registration process. All you need to create an account is an email address that you later use for logging in instead of a username.

Is it easy to navigate the site?

The 1xBit website is easy to navigate with the drop-down menus for each section – casino, sports betting, virtual sports, in-play betting, live casino, and bonuses – all of which are neatly listed among other sections. The website is imagery-rich and might appear a bit cluttered to some. Moreover, it uses infinite scroll which, when browsing through all of the games in the casino, can result in a somewhat buggy user experience. Aside from that, some parts of the website – like their FAQ section – are in Russian, which can further compromise the quality of the overall gaming experience.

1xBit casino is well-known for featuring an astonishing number of games from top game providers in the industry. Not only that, but the casino also has a section of 1xBit exclusive games in case you want even more. There’s even the promo code check tab where you can see available promo codes for both 1xBit bitcoin sportsbook and casino games.

1xBit is one of the bitcoin casinos that really have it all when we consider different casino games and software providers available on the 1xBit platform. Players can enjoy a plethora of 1xBit slots, play poker with or without live dealers, or they can try their luck with some of 1xBit’s proprietary games and lottery. There’s also the 1xBit TV casino section that guarantees a superb live gaming experience.

There are more than enough games in the 1xBit casino. The most populated category is the slots category with 2199 games from 40 game providers. Heidi in the Oktoberfest, Fear the Zombies, Durga, Mega Power Heroes – these are just some of the most popular names that you will find in the casino.

If you prefer a live gaming environment, you’ll be pleased to know that there are currently twelve live casino games providers at the 1xBit live casino. Industry leaders like NetEnt, Evolution Gaming, and XPG are just a few of the ones that provide an outstanding live casino experience at 1xBit. The live casino section features numerous table games including Caribbean poker, unlimited blackjack, Dragon roulette, Sic Bo, and many others.

There is a total of 50 1xBit in-house casino games where you’ll find dice and slot games, baccarat, blackjack, roulette, and many other fan-favorites. Players can also filter 1xBit games to easily find classic, short, challenging, and new games in this section.

The 1xBit casino also includes a poker room. Poker enthusiasts can opt for instant play, or download a PC version and a mobile app for Android devices. Poker tables can be filtered by the maximum number of players per table – 2 (heads up), 6 (max), and 7-10 (full table). Other filtering options allow players to sort the poker table by types of bets – micro, low, medium, and high. The possibility of playing for fun instead of real money is also available.

BetGames.TV is one of the most interesting sections in the casino where you can find nine live games. Six games are a combination of traditional betting and different lottery, as well as dice games such as Lucky 6, Lucky 5, and Dice Duel. Casino players can also bet on poker and baccarat, as well as take part in War Bets which is a card game between the player and the dealer.

In the 1xBit games section, the popular titles include Lucky Wheel, Game of Thrones, Dice, Rock-Paper-Scissors, Thimbles, and 777.

1xBit casino provides players with the option to choose whether they want to play poker for free or for real money. The slots section also features a lot of games that are available for free play. To find out whether free play is available for a particular slot game all you have to do is hover over its image.

The average loading speed of 1xBit casino games is good, taking up to 10 seconds for a game to fully load. 1xBit casino players can enjoy playing their favorite games in full screen, and even open a game in a separate window. The game table allows players to play up to four games at once, add a game to favorites, and switch between a demo and a full version of the game.

1xBit works with leading game providers to ensure excellent gaming experience with a variety of games. Below are some of the primary software providers of slot games with the number of slot games they offer.

The live casino software providers are also listed below.

When it comes to the question of whether the games at this popular bitcoin casino are provably fair, there’s no separate section on the website dedicated to this aspect of gambling. We again referred to the 1xBit customer support staff to tell us something in this regard, but they said they weren’t authorized to give this information.

However, there is a provably fair category available for the in-house casino games. Players can check the fairness of the 1xBit dice, Poker Light, and roulette games, and the casino uses the MD5 algorithm to ensure that.

After we’ve run the Google PageSpeed test – on both the desktop and the mobile version of the site – the results were far from great. According to the speed test results, 1xBit doesn’t use browser caching tools, and the images on the website are not optimized. Although Google PageSpeed assessed this site as poor and likely to provide a slow user experience, we didn’t encounter any problems while browsing the site and noticed a solid game loading speed. However, when testing 1xBit casino on a mobile device, we noticed that the game loading time is somewhat longer when compared to the desktop loading times.

Players that enjoy playing casino games on the go won’t face any problems experiencing 1xBit on mobile. The casino has a mobile version of the website, which flawlessly adapts to smaller screens and any handheld device, and Android users can also make us of the 1xBit app. 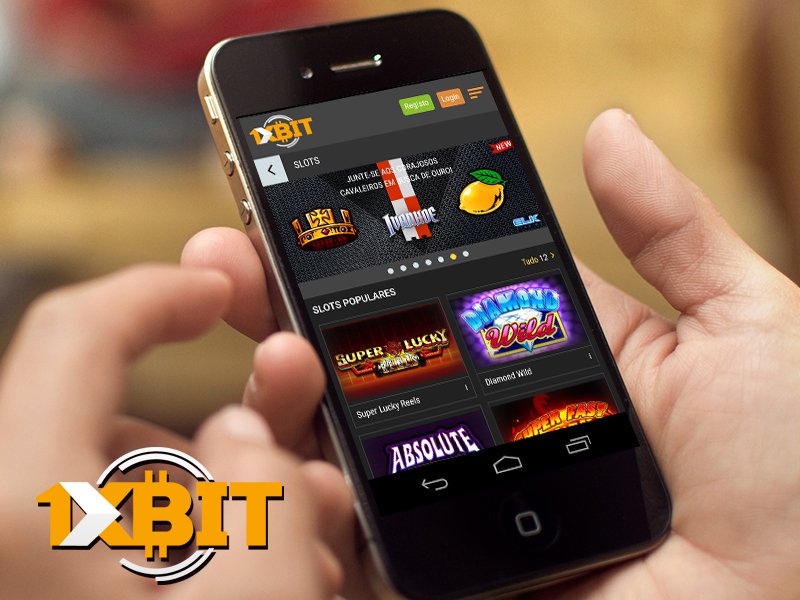 The 1xBit mobile website features fewer games than the website’s desktop version. When browsing through the slots games, players can see which games are available on mobile, as there will be a little smartphone icon in the game thumbnail description.

One of the fields where 1xBit excels is a large number of supported currencies and payment methods. Casino players can make deposits and request withdrawals in various cryptocurrencies – milli-Bitcoin (mBit), Dogecoin (DCT), game (game credits), NEM/XEM, mDash, mLTC, mETH, mXMR, mZEC, and FUNC (Fun Coin). So, 1xBit is not just a Bitcoin gambling platform; gambling with other digital currencies is available as well, most notably Ethereum gambling. Furthermore, many other payment methods are supported as well, including bank cards, e-wallets, mobile payments, bank transfer, and more.

Most of the deposit methods available at 1xBit aren’t associated with any services fees, and there are only a few exceptions. Deposits are instant with each of the methods, and the minimum deposit amount is $1. As far as withdrawals are concerned, there are no service fees associated with them either. The average payout time is fifteen minutes, and the minimum withdrawal is capped at $3. On the other hand, the website doesn’t mention anything about the maximum amounts casino players can deposit or withdraw from 1xBit.

This aspect of online gambling is another place where 1xBit shines. As you will see below, numerous ongoing and seasonal promotions are currently being offered on their website. New customers can claim a multi-deposit 100% up to 1 BTC bonus that grants you extra funds on your first four deposits. All you need to do is make the minimum deposit of at least 5 mBTC.

The 12 Days of Christmas tournament ends on December 23rd, 2017. In order to participate in the tournament, you should play baccarat and blackjack at the 1xBit Extreme Live Casino Roulette. The qualifying game rounds for the tournament are all game rounds in which less than 70% of the outcomes on the wheel are covered by players’ bets.

On each day of the tournament, five top players will be selected for the final draw. For each game they play, casino players will get one point. In order to qualify for five extra points when they win €20 across all Extreme games, players mustn’t bet “behind during this promotion”. The total prize amount is €5.000 which will be split between twelve winners.

To buy promo codes from the 1xBit promo code store, all you have to do is play casino games at the 1xBit casino. The more you play, the more bonus points you’ll earn, which you can then use to get promo codes and games. Additionally, you can request bonus points once in three days.

Bonus games at the 1xBit Casino

There is a special section on the 1xBit website dedicated to bonus games. These games can bring valuable prizes and bonus points to casino players.

You can play free games at the 1xBit casino even before you register for an account, and you needn’t provide any documentation to play demo games on the website. When it comes playing for real money, 1xBit’s terms and conditions state that the company can require casino players to go through an identification process.

For the purposes of writing this 1xBit review, we contacted the live chat staff on multiple occasions and got an answer within 15 minutes. One time we waited for half an hour for the support staff to answer our questions, so we couldn’t say that the staff provides instant replies. Moreover, when we asked them about the 1xBit licensing and some basic info about this bitcoin casino, we either got the answer that they were not authorized to give this type of information, or we were redirected to their email support staff that gave us the exact same answer.

Another common answer we got was to look for the answers on 1xBit’s terms and conditions page which, in turn, contains very little information about the casino. Aside from that – for the questions that we got an answer to – we felt as the staff was reading from scripts.

Another section of the casino website where you can turn to for help is 1xBit’s FAQ page. However, you might find yourself in a bit of trouble here if you’re not fluent in Russian or ready to use Google Translate. This is because – as previously mentioned – the English version of the website features some sections in Russian.

To conclude our 1xBit casino review, we’d like to point out that – while this casino has one of the broadest selection of games and payment methods out there – we’re not very keen on the fact that 1xBit provides no information about licensing or that only three games on the website are listed as provably fair.